In classic Greek mythology, the Hydra was a marsh serpent that had nine heads to start with, but each time one was cut off, two more grew back. Hercules finally defeated the Hydra by cauterizing the necks as he slew the beast and accomplished his 12 labors. Hydra makes a rather fitting root word for Hydrilla verticillata, a submersed non-native plant that is native to India but first appeared in Florida in the late 1950’s and rapidly spread throughout much of the state. 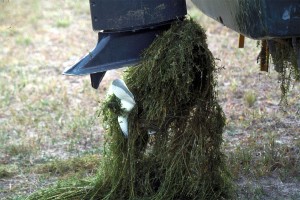 Hydrilla has been described as “the perfect aquatic weed” because of its tolerance to conditions that prevent other native plants from flourishing, including its tolerance of low light, high turbidity conditions and a wide range of salinities and nutrient conditions. Moreover, it can spread through fragmentation, sexual reproduction (seeds), tubers that grow on the rhizomes (rootlike structures that anchor hydrilla to the bottom and allow rapid spread), or turions (buds formed in the juncture where leaves attach to the stems).

Hydrilla was introduced to Florida as an aquarium plant. With few natural biocontrols, such as native insects or diseases, the plant can rapidly occupy nearly the entire water-column of shallow lakes. It can impact both recreational and commercial navigation, water storage and water flow that is needed to prevent flooding during emergencies. It can spread on boat motors or trailers even after it appears to be thoroughly dried out, and survive dewatering of lakes in virtually dry soils and then rapidly take over when the water body refloods. Chemical and other control efforts, including biological and mechanical approaches, cost millions of state dollars annually.

The Florida Fish and Wildlife Conservation Commission (FWC) is in the process of creating a long-term black bass management plan, and one of the critical aspects to consider is that of aquatic plant management and how to deal with exotic plants such as hydrilla. Recently the Legislature moved invasive plant management from the Department of Environmental Protection to the FWC. An intra-agency task force is actively working to develop new plans and processes for managing hydrilla. Overall, the section funds, coordinates and contracts invasive non-native aquatic plant control efforts in 1.25 million acres of public waters that are accessible by public boat ramps in Florida.

What makes invasive plant management so complicated is that hydrilla can be a positive contributor to recreational fisheries, waterfowl populations and even help support endangered species such as the snail kite. On the other hand, it is not native to Florida, and general conservation philosophies as well as the economics of attempting to manage it cost effectively can provide a compelling reason to try to keep it out of new areas and keep it under control to prevent it from topping out; spreading and causing problems with navigation, flood control, potable and irrigation water supplies; and affecting other forms of recreation and the aesthetic beauty of lakes.

A recent meeting co-hosted by FWC and the U.S. Fish and Wildlife Service dealing with management plans for hydrilla on Lake Tohopekaliga highlighted some of the controversy. “Lake ‘Toho’ contains large amounts of hydrilla, which can cause navigation problems and limit access to boaters,” said Bill Caton, the Invasive Plant Management Section leader. “This plant also provides an abundant food source and habitat used by a non-native species of apple snail that lives in the lake.” In turn, the snail is eaten by snail kites, which are among the most endangered birds in Florida, making Lake Toho one of the few areas in the state where kites can find plenty of food.

Consequently, the FWC and the USFWS will adjust when and where hydrilla is treated so enough snails will be available when kites nest this spring. The Audobon Society is especially interested in snail kites. Other stakeholders like the Florida Freshwater Fisheries Coalition want enough submersed plants to provide good fisheries habitat and areas for anglers to catch fish. Meanwhile, there is also a legitimate concern that if too much hydrilla is left untreated, parts of the lake will not be navigable and plant biomass could affect flood control.

As part of the first draft of the Black Bass Management Plan, which is being reviewed (www.MyFWC.com/BassPlan_Survey), biologists laid out some pros and cons of aggressively managing hydrilla. 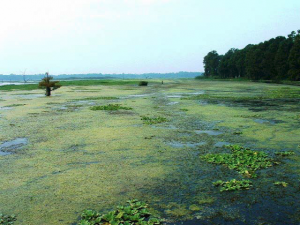 On the pro side, suggesting the need for aggressive management is the fact that hydrilla can, given the right circumstances, completely cover a lake in a short time, out-competing native submersed plants. In some cases, die-offs of significant coverages of hydrilla can threaten water control structures and deplete dissolved oxygen, causing fish kills. Allowing significant coverage of hydrilla can also threaten the native ecology of nearby lakes that are hydrilla-free, through transport of this plant on trailers and boats. Native submersed plants should be conserved because they serve as important habitat without the need for much management. In addition, it is much 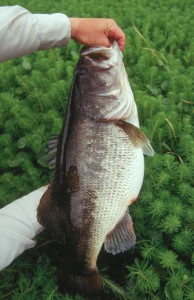 cheaper to manage Hydrilla when it only exists in small areas, than having to manage it after it gets out of hand, which also can lead to greater amounts of muck being deposited on the bottom of our lakes.

On the other hand, submersed aquatic plants provide a substrate for insects that provide food for many species of fish and nursery habitat for young largemouth bass. Although native submersed plants, such as eelgrass, southern naiad and peppergrass, can provide this function, hydrilla needs much less light to grow and can provide habitat in areas where native submersed plants cannot. Therefore, a plan to allow hydrilla to provide important habitat should be developed for lakes where hydrilla exists and native plants aren’t providing adequate coverage. While management of hydrilla is necessary to keep it from covering the whole lake, and that management may be expensive, the economic benefit of the fishery should justify the management cost.

Anyone know where we can find another Hercules to take on our Hydra-illa issue?

You can contribute to the dialogue by completing a brief survey at www.SurveyMonkey.com/s/bbmp_plants, which focuses on aquatic plant management.