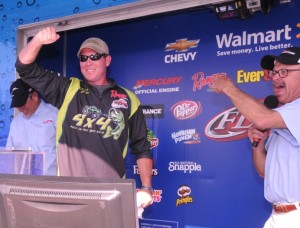 three-day total of 13 bass weighing 51 pounds, 11 ounces. For his victory, McMillan earned $35,000 and a Ranger Z518 with a 200-horsepower Evinrude or Mercury outboard motor.

“Today was perfect timing for me to catch that shad spawn,” said McMillan. “The weather was overcast, breezy and foggy and that kept the shad around for another 20 minutes. I was fishing on the sand bars near Spring Creek, and just swinging a 4×4 Bass Jigs 3/8-ounce white swimjig. I was just swimming it through that grass early this morning, and the overcast weather allowed me to get the extra key minutes that really helped me to catch them.

“I had 11 bites today, and caught eight fish,” McMillan went on to say. “I was fishing anywhere from 2 1/2 to 4 1/2 feet of water. I would fish the sand bars in the morning, then go throw a worm real slow for the rest of the day. I also caught a few using a Gambler EZ Swimmer, white, with a big paddletail for good vibration. I figured coming in that it was going to take around 50 to 55 pounds to win this tournament, and I’m happy I was able to get there.”

McMillan said he would enjoy his victory, but he’s already thinking about the next EverStart Southeast division tournament at Santee Cooper.

“I believe fishing at Santee Cooper is going to be a little tougher than usual,” he continued. “The fish are on the beds right now, so by the time we get down there they’ll be moving deeper, and that will make it a little tougher than it normally does there. I’m looking forward to it, though. It should be a very competitive tournament.”

Rounding out the top 10 pros were:

Gary Fleming caught the biggest bass of the tournament in the Pro Division Friday – an 8-pound, 2-ounce bass – that earned him the day’s EverStart Series Big Bass award of $300.

Cal Clark of Pulaski, Tenn., won the Co-angler Division and a Ranger 177TR with an Evinrude or Mercury outboard motor with a three-day total of 13 bass weighing 43 pounds, 12 ounces.