McMillan is the man, despite local PRO protesting! 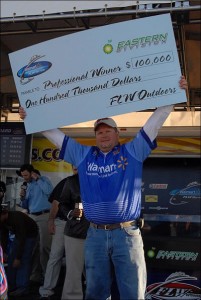 At the time, the FLW Series event was the biggest tournament he had ever fished. During that tournament he made some bad decisions, and his runner-up finish left him on the edge of what could have been.

After that tournament, he had no intentions of fishing the rest of the 2008 BP Eastern Division tournaments. But at the last minute, he decided to go to the second stop, Lake Wheeler, sight unseen.

A $10,000 check at Wheeler for a 49th-place finish made him push on to Lake Champlain and then to Clarks Hill, where he scored another top-10. At the end of the 2008 FLW Series season, McMillan was crowned BP Eastern Division Angler of the Year after fishing against some of the best names in professional bass fishing.

With that Angler of the Year title, McMillan proved something to himself: He could compete against the best and finish at the top. That confidence carried into the new 2009 Series season, where the opener once again landed on his home lake of Okeechobee.

This time around, however, McMillan exhibited the kind of calmness and focus that only comes with tournament-fishing experience. Over the course of four days, the Okeechobee local never faltered and amassed a dominating weight of 74 pounds, 4 ounces to win his first major title as a professional angler.

“This feels really good,” McMillan said after pocketing $100,000. “After I won the points in the Eastern Division last year, it took a lot of pressure off me. This week I went out there and fished for me. I found an area, developed a game plan and stuck to it.”

That game plan involved targeting spawning bass in an area on the east side of the lake.

“I actually found this area on January 7th, before the cutoff,” McMillan recalled. “I normally fish the south end of the lake, but I went up to the east side and found a beautiful area, full of gin-clear water and a nice hard bottom that had mussel shells. I knew right then that area would be the hot spot for this tournament, and it was. There were a lot of people that found it and caught fish in there this week.”

McMillan’s one-two punch for the area centered on swimming a Reaction Innovations Skinny Dipper through the grass and sight-fishing a Sweet Beaver on beds.

The Skinny Dippers were rigged with either a Reaction Innovations Screwed-up locking weight or a 1/32-ounce screw-in weight, punched into the nose of the soft-plastic swimbait with a 6/0 Gamakatsu hook. He used a variety of colors and tied the Dipper to 65-pound-test Suffix braid.

The Sweet Beaver (white) was his sight-fishing weapon, topped with a ¼-ounce weight and tied to 25-pound-test Trilene 100% Fluorocarbon.

“The first day was mostly the Skinny Dipper,” McMillan said. “The next two days I mixed it up with the Dipper and the Beaver, and then with the wind today, I couldn’t sight-fish so I went back to swimming the Skinny Dipper.”

McMillan noted that when he fished the Skinny Dipper, he did not “buzz” the surface, but instead reeled it under the surface.

Today he only caught four fish, but they weighed 16 pounds, 14 ounces, the biggest catch of the day despite the high winds.

For most of the week, Kreiger put his sight-fishing skills to work using a white Zoom Superhog to pluck fish off beds.

In fact, during the week, McMillan gave credit to Kreiger for giving him some sight-fishing tips.

Kreiger and McMillan shared the same productive bedding area on the east side of the lake.

Though Kreiger estimated that 80 percent of his fish came sight-fishing, he, too, used the Skinny Dipper to snare a couple of key fish.

The ever-consistent Shin Fukae of Mineola, Texas, was the only pro to catch a five-bass limit Saturday on a blustery day four. His 9-pound, 10-ounce catch gave him a four-day total of 59 pounds, 9 ounces, good enough for $40,000.

Fukae spent most of the week swimming a 5-inch green-pumpkin Swimming Senko on the surface of Kissimmee grass in South Bay.

With the gusty conditions today, he adapted by fishing a ChatterBait around cattails.

His ChatterBait, however, was rather unique.

“I took a ChatterBait blade and put it on an All-Terrain swimming jig,” Fukae explained. “Then I put a 4-inch Swimming Senko on for a trailer.”

Both the skirt and the Swimming Senko were green-pumpkin in color.

Surman, too, did a lot of his damage on the east side of the lake in the area that McMillan and Kreiger were fishing.

His primary baits were a 5-inch Gambler Paddletail worm, a Gambler 10-inch worm and a Cane Toad.

“I did catch a few fish on the surface with the Cane Toad, but a majority of my fish came on the Paddletail and big ribbontail worms,” Surman said. “I used a 5/16-ounce weight on both and pitched them into holes in the grass.”

Mann has one thing on his mind these days: the Forrest Wood Cup on Lake Lanier in 2010, and rightly so. Few fishermen know more about Lanier than Mann, who has fished the lake all his life. But he has to get there first, and he made the first giant step in securing that berth with his fifth-place finish today.

“Make no bones about it: I’m after a Forrest Wood Cup berth,” Mann said. “I even put in extra practice time down here for it.”

“There was really nothing special about it,” Mann said of the huge limit. “I went fishing in the same area with the same baits like I did the days before; I just got some really big bites. It was a fun week, but I’m already thinking about the next Series stop on Eufaula – I want to make the Cup in 2010.”

Rest of the best

Rounding out the top 10 pros in the Walmart FLW Series BP Eastern on Lake Okeechobee:

Till next time tight lines and good fishing….