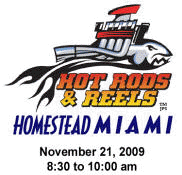 This event raises money for the Darrell Gwynn Foundation and Speediatrics to help young adults suffering from spinal cord injuries or debilitating diseases. Through the help from all of it’s sponsors the foundation is able to continue to purchase motorized wheelchairs for well desired recipients.

This year we had the help and support of a new sponsor, Rejuvenate Auto a fantastic product owned by a great family. Not to leave out Bass Pro Shops which has supported this effort from day one, along with Sprint, Hook & Tackle shirt company which provides those great looking fishing shirt you see in the pictures.

So this year, right when you thought it could not get any better we top the charts. With help from the “The Outdoor Channel” filming for the second year in a row. We bought in one of the best fishing host TV has ever experience, Fish Fishborne. With the support of the NASCAR drivers and car owners, sponsors and television such as ESPN, Speed TV and Fox, all that was left is to pull off another great fishing tournament.

With boats in the water, Captains rigged up and ready for competition, drivers and car owners on board, the only thing missing were fish. The official start was given by Darrell Waltrip, using the second most famous words in NASCAR. He controlled the moment, as everyone listen to him say, “Boogity, Boogity, Boogity lets go fishing boys,” and with those famous words the anglers and guess wet there lines for the first time. 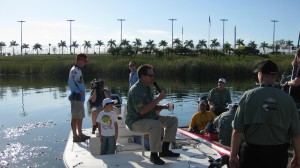 The event scheduled for 90 minutes, was off to a quick start as it only took a few minutes before Captain Rick Persson with Regan Smith boated their first fish. Almost simultaneously across the lake Bill Elliott hook into his first fish keeping things close. Only minutes later right out in front of the stage Martin Truex battle his first fish and lands it with the help of his team. At this point my head feels like it’s spinning around in circles with the amount of fish being caught. Both ends of the lake and twenty different boats with bent poles! 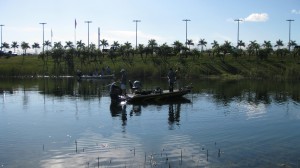 Several boats seem to huddle to the west end of lake, as with most fishermen I think several of these guides/drivers were on the bent pole pattern. “Find someone with a bent pole and fish there.” In the middle of that crowd was Capt Tony Masiello with driver Jamie McMurray landing his third fish and completing a limit to make them the favorite at this point. Back to the other side of the lake, Kenny Wallace was seen with his shoe in hand and hamming it up to the camera crews, “what’s new.” We watched Bobbby Labonte land his second fish right beside Kenny’s boat, while all the way at the other end of the lake Scott Wimmer, David Gilliland were each working there way in to contention as the time started to whine down.

Bumping of boats seem very natural for the drivers!

A last minute glance for Darrell Waltrip’s boat, not even with in sight. But after a quick pause we were able to hear them just fine. Off in the distance, just outside of D.W. was legendary Bobby Allison, and if you know anything about the Allison family you know they can race and fish.

As the tournament concluded, the boats were called in. The peak of the event was about to happen, and it wasn’t the weight-in. As the drivers and car owners approached the banks they were called over for the DGF wheelchair presentation. The highlight at each even is the wheel chair give-a-way, to a recipient in need. This year it was the family of Kimberly Perez, a very deserving family. The presentation given by Darrell Gwynn and ended with a standing applause by the drivers, media and crowd.

Now it was time for the weight-in, started no different then your average tournament with lots of dock talk. Everyone from Richard Childress, Darrell Waltrip, Clint Bowyer, Martin Truex and Jamie McMurray feeling confident in there ability to take the trophy home from today’s event. Bragging rights going in to the Daytona 500 event in February are key.

As the weight-in progressed, the lead went back and forth from Bill Elliott, Martin Turex to Richard Childress. The two sleepers hiding in the crowd seem to be Jamie McMurray and Clint Bowyer teams which both seem to be playing head games with each other. Almost as if they were in the final laps of a race and neither want to let off the gas going into the last turn. At his point Regan Smith with a limit of fish was leading going into the last few drivers to way-in. First up of the final few was Clint Bowyer’s team, with a big smile Clint was confident in there catch, and “BAM” the fish hit the scales and a new leader of the tournament.

Good or bad, now Clint had to sit and wait through the last couple of teams to weight-in. Next up would be Bobby Allison, with a story about the ones that got away today. Despite the mishaps he was still able to land a nice 4 pound largemouth to take the lead for the largest bass of the tournament leaving Clint Bowyer as our overall leader. After a few other close attempts at the lead, next up was the team of Jamie McMurray, with a new Bass Pro Shops Outdoor World sponsor for 2010 there may have been a little pressure to have the scales go his way. 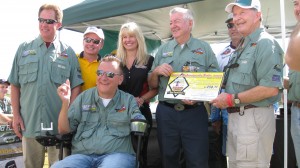 After a short interview, Jamie’s fish hit the scale. With a close oversight from Clint Bowyer and others the scale stopped just 6oz short to put Jamie in third place for the day. Giving the deserving 2009 Miami/Homestead trophy to the top team award of Clint Bowyer. 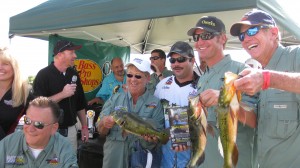 We would like to thank all the sponsors, drivers, guides and participating and making this such a successful event this year, if you would like to see more pictures from this event and/or pass events click this link!